The Benefits That Managed IT Services Can Bring to Government Agencies 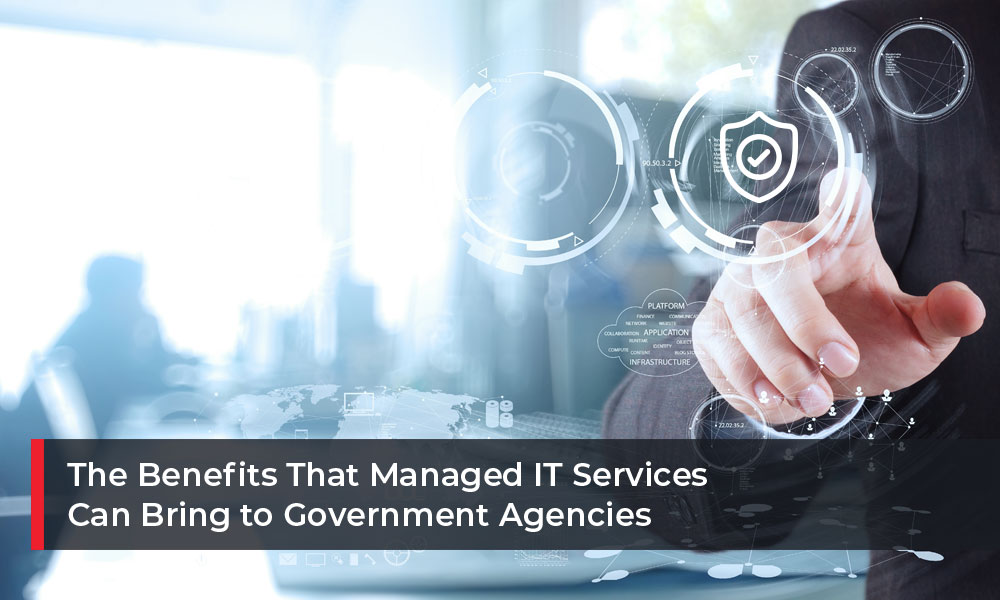 Tired of continually thwarting cybercriminals at your government agency? Managed IT services can help.

Whether at the local, state, or federal levels, managed IT services can prove a valuable asset. They can help an office take control of its network security, update its IT infrastructure, and put an end to many of the biggest threats routinely plaguing government offices.

DSI is an experienced, managed IT service provider for government agencies. Read on to learn about the state of IT for offices at every level of the government, and how managed services can help.

Whether from state actors or private individuals, agencies face a range of threats, from nuisances to damaging blows. Over the past two years, government bodies in the US have experienced:

· Ransomware attacks: Starting in 2018, ransomware became a serious problem for many government offices, particularly those on a municipal level. These offices frequently lacked effective backup policies that made ransomware attack lucrative. Cities like Baltimore have been forced to pay hundreds of thousands of dollars to criminals who stole and encrypted city files – plus millions more to deal with the aftermath.

· Malicious state actors: Governments hacking other governments is nothing new, but 2018 and 2019 saw a rise in such attacks. According to the Center for Strategic and International Studies, almost every level of the US government – from municipal to federal levels – was subject to a hacking sponsored by North Korea, China, Iran, Vietnam, Russia, and others.

The State of IT in Government Offices

As the statistics show, many government offices are unequipped to handle ransomware attacks. This may seem surprising, but it’s often the result of budget cuts and understaffing.

Understaffing, in particular, is occurring at all levels of the government. With fewer individuals overseeing critical aspects like cybersecurity, agencies are experiencing more security risks. IT personnel who are charged with maintaining security for an office are spread thin with everything they need to manage.

Additionally, USGAO indicates that the use of outdated technology and manual legacy processes is creating problems. Outdated encryption, unsupported hardware or software, and operating systems with known security vulnerabilities all rank among the most common cybersecurity risks identified in the 2019 report.

The US federal government planned to spend $90 billion during 2019, but some 80 percent of this budget was allotted for operating and maintaining existing IT investments. With cybercrime against government offices at an all-time high, that’s scary.

Fortunately, a solution exists. Managed IT services can help government agencies improve their security and reduce their operational costs.

The Benefits of Managed IT Services for Government Agencies

Managed IT services have increased in popularity over the past several years. Surveys show that as many as 70 percent of businesses use some type of service from a managed IT provider. There are many significant advantages to doing so, particularly for small businesses. However, government offices – which are run like businesses – also benefit from these advantages. Managed IT services:

· Put the right solutions in place: A managed IT provider first assesses an office environment, then makes sure the office has exactly what it needs and nothing less.

· Deploy 24/7 monitoring: Hackers know when employees are around and schedule their activities accordingly. A managed IT service provider ensures there’s always someone watching.

· Ensure the existence of backups: Keeping data backed up in a secure, offsite location is the first step to neutralizing threats like ransomware.

· Establish predictable budgets: With a managed IT service, there are no more unknowns in the budget. The provider sends one bill every month, and the office knows how much to expect.

Managed IT services are a valuable asset for agencies and offices at every level of the government. They deliver affordable, effective cybersecurity and modern IT infrastructure.

DSI has over 20 years of experience providing managed services for local, state, and government offices. Whether it’s a single office or a statewide contract, make sure to get exactly the tools that are needed with a pricing agreement that works with the budget.

Contact a specialist now to discuss the unique cybersecurity challenges faced by the government and DSI’s statewide pricing agreements.