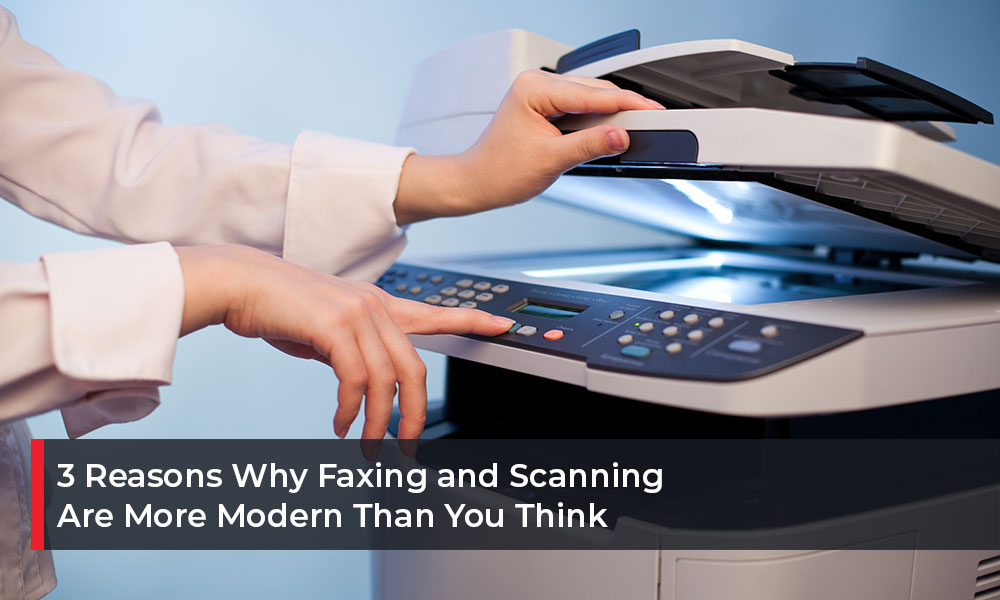 Ask five people when was the last time was that they faxed a document and they’ll provide a variety of surprising answers. A close relative of the more recognizably useful scanner, most offices have a weird relationship with their fax machine. Widely regarded as useless and seemingly rarely spotted in the wild, they remain a cornerstone of many regulated industries.

Despite the connotations given to such machines by popular culture, their use is not on the decline. Many multifunction printers come with the option to fax and scan documents. The reason behind the multifunction printer’s longevity is that people known how to use the device to its full potential. Here’s a rundown of tricks the modern fax machine has up its sleeve.

1. Scanning and Faxing to Digital Locations

Traditionally, faxing documents was associated with multiple hard copies. A person inserted a hard copy into one fax machine, and a hard copy printed out of the recipient’s machine. The process was sluggish and had about an 80 percent success rate which decreased the longer the document got.

Today, however, both scanners and fax machines can send documents to a variety of non-physical places. An office could feasibly send a physical document to:

· A folder on a network

· A specific computer or smartphone

· A specific file, such as a PDF

· A program or database

For organizations who routinely handle tremendous amounts of paperwork (especially paperwork filled out by hand such as forms at a doctor’s office), the ability to send documents to non-physical locations represents an immense time saver.

Likewise, the ability to scan and fax to digital locations has facilitated the rise of advanced capabilities such as form processing, document indexing, and archival processes. With a document scanning software, it is now possible to scan or fax a physical document to an email in searchable PDF form.

With modern faxing, documents no longer need to originate physically, either. With modern faxing, users can send documents to fax machines directly from places like their email, record-keeping software QuickBooks, or even directly off the press in Microsoft Office. That makes sending out official documents, invoices or contracts easier than ever before.

When sent from a computer, this method is known as IP faxing. It relies on software and an internet connection rather than a specialized piece of office equipment. With this method, any computer is now also a fax machine. IP faxing turns sending a fax into a quick two-click process rather than requiring a user to print and then fax.

Likewise, cloud faxing is the use of specialized faxing service to send, receive, and store faxes. Meaning users don’t even need to mess with a special faxing program. Instead, the faxing process operates much like any other cloud storage service.

IP and cloud faxing are both much faster and much more reliable because they operate on broadband lanes rather than over telephone lines. However, in either case, the result is less paper, faster transmission, and a process which barely resembles old-school faxing.

3. Fax Machines Integrate with Workflows Better Than Ever

Since many offices now rely on multi-function printers as the backbone of their document infrastructure, faxing finds new and more relevant uses as part of an integrated document management system. By using a multi-function printer as a document solutions hub, faxing is no longer a separate process but one which flows seamlessly with an organization’s other operations.

Most modern multifunction printers come with Wi-Fi, allowing users to operate printers from their smartphones and tablets as well as their computers. Manufacturers like HP make such integration as easy as possible, developing specific software to aid workflow in this way. Conceivably, if you can print from a device, then it’s also possible to fax from it.

The same is true for scanning. Need a digital copy of an important document on a mobile phone? It’s now possible because multifunction printers come with this capability out of the box.

Scanning and Faxing for the Modern Business

Many industries still rely on scanning and faxing because of the emphasis on hard copies of certain important documents. The use of fax machines and scanners isn’t going away any time soon. If anything, their evolution has made them a versatile technology even more at home in the modern office.

The rise of ever more advanced multifunction printers’ bridges and blurs the relationship between hard copy and digital. Faxing doesn’t need to start or end in the physical realm. In 2019, it often doesn’t.

The way businesses approach scanning, and faxing can impede or bolster its growth. DSI offers next generation faxing and scanning solutions for businesses which rely on these technologies. Reach out today for a free assessment.

DSI Has the Tools Your Educational Facility Needs
Read More »
Why Digitizing Your School is a Must!
Read More »
Telltale Signs It's Time to Replace Your Copier
Read More »