Is It Time to Upgrade Your Printer? Here Are the Signs 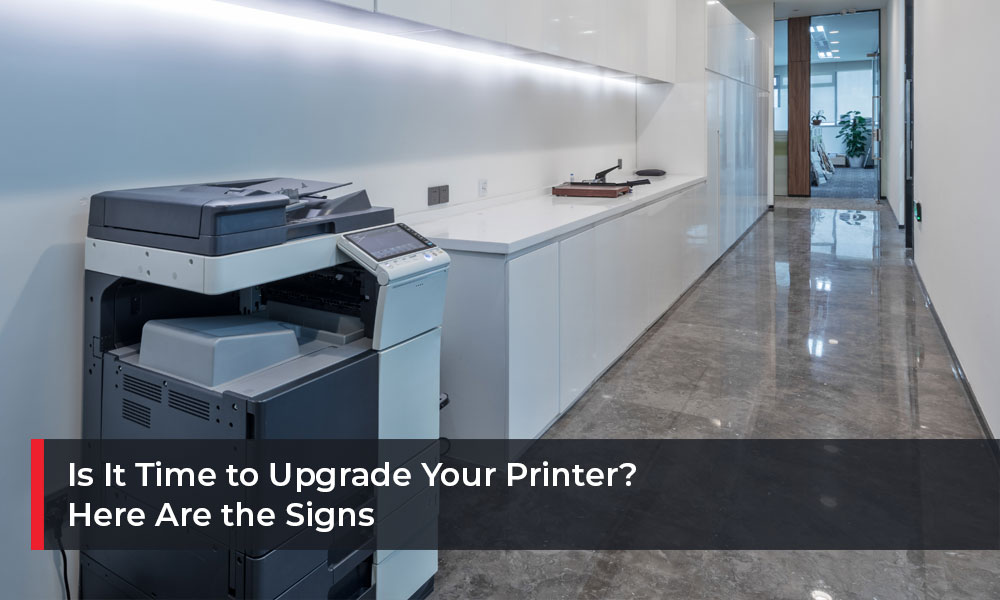 Printers are the cornerstone of the modern office, supporting many vital paper-based processes. Unsurprisingly, they also represent a sizeable investment for any company. Easily running into thousands of dollars for a new device, many companies may be tempted to hang onto a printer for as long as they can. Even when the signs that it’s time to upgrade the printer appear.

However, there comes a point when hanging onto an old printer costs more than investing in a new one. Here are five signs; it’s time to upgrade your printer.

Like all machinery, printers can last a long time if they’re maintained. However, they still eventually reach the end of their life. Is it time to upgrade your printer? Recognize any of these signs, and it might be.

1. The Printer Network Is Unsecured

Most modern multifunction printers rely on printer networks to connect printers to computers wirelessly. This technology has been around for a while, but it’s only been in the past few years that sophisticated security features have become standard on devices.

That’s occurred because printers have become recognized as one of the most significant security weak points in a network that most organizations miss. Most modern printers contain hard drives that store print jobs long after they’re printed. They’ve also got CPUs and Wi-Fi connectivity, making them more sophisticated. Hackers have noticed this, and it’s even caused the US government to issue a warning about printer security.

If any of this is news, there’s a good chance that the printer network in the office is unsecured. It’s time to upgrade to a printer with the security features necessary to keep documents safe.

Mobile printing has all but revolutionized the office environment. Leveraging its Wi-Fi connectivity, many multifunction printers now come with the option to print from a mobile device, scan or fax to one, or access the powerful integration features the printers now have.

In fast-paced business environments, mobile printing allows employees to stay on their feet and move with the flow of work while accessing the technology they need. Hospitals and doctor’s offices particularly benefit from this ability as so many now rely on tablets to capture and access patient information.

Didn’t know that mobile printing existed? It’s a staple of modern printers that is helping offices everywhere keep pace with the flow of operations.

Multifunction printers bundle several vital office functions into one machine, driving down the cost and use of consumables like paper and toner. Likewise, rather than needing to service several machines, a multifunction printer means an office only needs to call a technician once.

Printer models and lines refresh every few years, but manufacturers tend to keep spare parts and consumables available. Over time, however, they’ll stop making these items, causing them to get harder to find gradually. If eBay has become the primary source for the printer’s spare parts and consumables – or it’s getting harder to find a technician who knows how to work on the company’s specific model – it’s a sign that the device is dated. Consider investing in modern equipment.

4. The Printer Is Past Its Life Expectancy

Printers, like cars, can run for a long time if they’re taken care of correctly. However, like cars, they also succumb to wear and breakdowns. Unlike cars, they are often expected to run nearly non-stop at least five days each week. They see significantly more use than a car, so don’t try to hang onto one for as long.

The average lifespan of a laser printer is around five to six years. That reflects not just the length of time it takes for parts to wear out, but also the general product lifecycle on the market. To put this into context, the iPhone 6 was released about five years ago. Is the printer older than an iPhone 6? It’s time for a new one.

A printer is meant to augment the efficiency of an office by making processes centralized and more convenient. Old printers that cannot keep up with print demand, are subject to constant breakdowns, and require specialty consumables, will eventually get in the way of office productivity.

Just like no one keeps a car that cannot reliably and safely drive the road, it’s not smart to hang onto a printer that cannot meet the office’s needs. Doing so represents an opportunity cost that can hamper office efficiency.

Get the Right Tools for the Job With DSI

There are many signs out there that it’s time to upgrade your printer – these are just the five biggest ones that most people experience. DSI helps companies find modern, effective, and affordable office technology solutions to enjoy operational efficiency within their budget.

Ready for a printer upgrade? Contact DSI today to discuss your printing challenges and goals.